Today is the last day of National Domestic Violence Awareness Month in the States.  Although there are horrifying statistics relative to domestic violence around the world, they can only begin to show the tip of the iceberg.  Survivors must know that there is support and hope for them. I saved this book review for today as this novel shines a bright light on the abuse which is often tucked away into a dark corner.  I applaud people willing to write on the subject.  Jade Reyner, one of our own WordPress authors, has done just that. It is not my habit to read contemporary romance, but this novel struck a chord with me as a health care provider, because it deals with so many contemporary issues that affect women’s health.   Marriage, romance, desire, love, domestic violence, loss, and hope are explored in a modern day setting.

The book is technically sound, well written and well edited.  Some of the characters are deeply developed and some are superficially shallow, and that is how people in the real world strike me socially, so the novel is most realistic.  The main character is challenged as she examines both her heart and her societal commitments.  It is a love story that involves a lot of pain and growth.

From the very beginning, it is evident that domestic violence, including marital rape, would be prominently featured. Reyner did very well throughout her story, to illustrate the excuses and cover ups that women employ to prevent discovery and deal with the shame.  The viciousness of the cycles and the honeymoon phase play a part to some degree, also adding to the realism. There is quite a bit of slapping around and throwing punches in this fast paced novel.  Reyner also does very well to demonstrate the emotional extremes of both men and women. There are a lot of twists and turns making a rather common plot interesting to me.

The romance that the main character develops, while giving her some sense of joy, increases her shame as she struggles to come to terms with what is important to her.  There are several graphic sex scenes; hot, erotic, and steamy. Interesting to me personally, were the British idioms and colloquialisms.  I would highly recommend this read for those who enjoy contemporary romance, and those who may live, or touch the life of one who lives, in the shadows of domestic violence.  The series promises to carry the reader further on this romantic journey of self discovery.  I give this book 4 stars out of 5.

Get “Catalysts” now, today, and others by this Master of Fantasy, “Beginning of a Hero” and “Prodigy of Rainbow Tower” by Charles Yallowitz, for 99 cents. And check out this interview of the author!

Do you write under any other names?

What are you currently working on?

I am currently working on the Legends of Windemere series.  I’m editing book 3 of the series with a close friend when she is free and book 4 when I’m on my own.  I’ve already finished the first draft of book 5 and will edit that once I’m done with book 4.  It probably sounds more complicated than it actually is.  Even worse if when I mention that I use weekends to outline future series.

How many (if any) books do you have published and what are their titles?

I currently have three books published with Amazon Kindle:

Legends of Windemere: Beginning of a Hero, which is the first of my high fantasy series.

Legends of Windemere: Prodigy of Rainbow Tower, which is the second of my high fantasy series.

Another great wordpress “How To” post from Green Embers.

Rona Black has some amazing photography on her blog, but you really have to check out this cool possessed squirrel, just in time for Halloween!

In the novel, “Red Clay and Roses”, Sybil and Nathan, an interracial couple, must find a suitable restaurant in which to dine in Atlanta.  They needed food, but no sit-down service would accommodate them in 1954.  They ended up at The Varsity, a drive-in restaurant that I will be showcasing today.

Many younger people today cannot begin to understand or relate to the oppressions of the black/African American race in the 20th century.  Although the Civil War was over in 1865, and African American slaves were set free, the oppression of people of color lingered with prejudice, particularly in the Deep South, south of the Mason-Dixon Line.  The Jim Crow laws were state and local laws in the United States enacted between 1876 and 1965 . They mandated de jure racial segregation in all public facilities in Southern states.

Some examples of Jim Crow laws are the segregation of public schools, public places, and public transportation, and the segregation of restrooms, restaurants, and drinking fountains for whites and blacks. The U.S. military was also segregated. The new laws in 1965 did not change much for a very long time in the South.  I was born in Georgia in 1960 and my schools were first integrated in 1971, when I was eleven years old and in the fifth grade.  We are; perhaps, the last generation in the U.S.A. to be forced, by law, into segregation.

As for public places, restaurants were some places that had a very serious policy of segregation.  Whites and blacks did not dine together.  Blacks could cook and serve the food, but weren’t allowed to dine at the whites only establishments.  Even after the Jim Crow Law was abolished in 1965, many made their establishments; schools, restaurants, and nightclubs, “Private” or “Members Only” to skirt the law.   The Drive Through service restaurant really didn’t catch on until the 1970s. 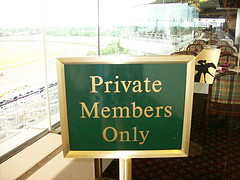 In-n-Out Burger claims to have built the first Drive-Through restaurant in 1948.

Before the infamous Drive Through service, Drive In service burger joints had the market on quick service feeding frenzies.  These offered a drive up curb service where patrons were often met by girls in shorts or short skirts on roller skates in the 1950s.

One of the earliest and most famous was originally named “The Yellow Jacket,’ Now, The Varsity, it was established in 1928 at the corner of Luckie Street and Hemphill Avenue in Midtown Atlanta. Its founder, Frank Gordy, a Reinhardt University graduate, briefly attended The Georgia Institute of Technology (Georgia Tech) but dropped out in 1925. Then, as now, the restaurant catered heavily to Georgia Tech students. The present structure, on North Ave. now covers two city blocks, and boasts to be the world’s largest Drive In restaurant.  600 cars can be accommodated at The Varsity at one time in a multi-level garage.  In one night, they served 30,000.

One of the best-known employees at the Varsity was Erby Walker, who worked there for fifty-five years until he died in 2008. He started at the Varsity at the age of fifteen sweeping floors, and was nearly fired on the first day, but soon graduated to the kitchen. Mr. Walker was noted for his ability to move the service line quickly, especially during the rush period right before a Georgia Tech football game. His signature catchphrase was, “Have your money out and your food on your mind, and I’ll getcha to the game on time!” He retired in 2003, but came back three weeks later. That year Walker was inducted into the Atlanta Convention and Visitors Bureau Hospitality Hall of Fame

Comedian Nipsey Russell began his entertainment career at The Varsity in the 1940s as a car hop. The creative and resourceful Russell would dress in a flamboyant style and pepper his order-taking duties with jokes and amusing songs, thereby earning him extra tips. U.S. presidents Jimmy Carter, George H. W. Bush, Bill Clinton and Barack Obama all visited The Varsity during their terms in office. Madartist Jack Davis has done advertising for The Varsity.

Along with ‘What’ll ya have?” the Varsity staff, as was common practice, developed their own jargon when calling out orders. Being a restaurant with an open grill, the customers could overhear the staff’s slang and eventually began adopting it as their own when placing orders. Recognizing that the customers enjoyed being ‘in on the joke’ the Varsity eventually began listing its items with both their conventional and jargon references on both their overhead and printed menus.

This Halloween week’s prompt at the CSB! Come on over and Trick or Treat!

Your daily reminder to pick up a copy of Catalysts for Halloween!  This new horror novella is a gripping scare for 99 cents.  Be sure to search by the book title and author name, so more people will learn about it.  This is how books end up on the ‘Also Bought’ and ‘Also Viewed’ lists that you see on product pages.

Don’t forget to search Amazon for more of my books such as the Legends of Windemere fantasy series and Bestiary of Blatherhorn Vale, each one for 99 cents.

Mini autobiography:  In high school and after I got married, I dreamed of being a writer…but we were poor, dirt poor, not a pot to piss in poor…(well, we had two toilets, but only one worked), but we ate too much W.I.C. cheese, peanut butter, cream of wheat, cereal, and other Government staples.

A hospital…on the merit of my grades, offered to pay my tuition, books, and transportation to college to become a nurse…I wanted to improve my family’s standard of living…with three kids, school, and work, life was hard, but we lived it…yet, it was never enough… no matter what we had, we wanted more…it was futile…the stress was enormous…eighteen years later I got divorced… and being a nurse afforded me a nice single lifestyle…but it wasn’t enough, I wanted more.

Fell in love at the age of 46, got married again, at 48, after 12 years single (on purpose, by choice)….happier than I have ever been…quit nursing full-time after 30 years…started writing again…did I say,

“HAPPIER THAN I HAVE EVER BEEN!?”

Why the story? : A friend just wrote on his blog, “You choose the keys to your car.”

Love and writing…two things that make me very happy. My two keys.

What makes you happy?

Another helpful post! Why don’t you just head on over there and tell him what you need to know. Bradley will be happy to oblige!

Green Embers is full of useful information. There are so many cool things to do with WordPress that I don’t know about, and this was one of them that I would like to share with you.