Yet, you made my heart dance.

Cloud brought down from heaven above

To touch my lips with your love.

That you, fair one, cannot begin to understand.

Daring to care and share the joy found in feeling.

“Vulgar,” they would say about the display of our affection.

And still you turn to me, and call me your golden apple.

Dropped from a tree with sturdy roots deep in an

Earth you can only wander on with trepidation.

Wrap your ebony branches around my ivory limbs,

You beg, and cover me with your green leaves of envy.

Shield me from that which seeks to separate us.

Bring peace to the minds of those who fail to know

The sweetness of amour in any color of the rainbow.

The livid can die alone and bereft,

Taking their hatred with them.

This Halloween week’s prompt at the CSB! Come on over and Trick or Treat!

I opened my eyes this morning

And the world had ended as I knew it to be

Today begins the yesterday of tomorrow

I will make it a good one

And my memories will cast no dark shadows on me

Tomorrow is not something that I can control

I will put my faith in the day

And tomorrow the world will begin again free 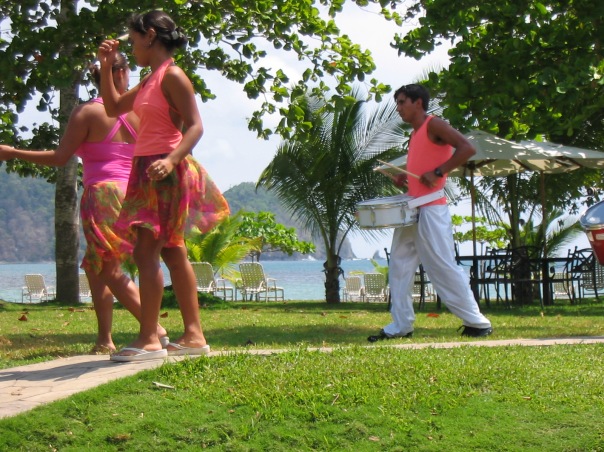 So bring on the cabana boys and all the margaritas

RUM!? I’ll have mine in a smoothie, ‘cause I’m a healthy fool!

There’s a lot that we that could tell, but just a few you need to know

We don’t judge on bad behavior, reveal the secrets that we know

Or how you calmed my fears and wiped my tears away

But that would get all soppy and maybe make you cry

So I’ll make my final statement, and let your face stay dry 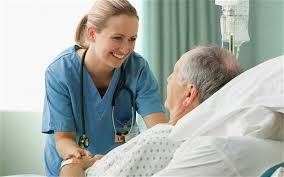 Ah! She comes between me and my white barren walls,

Touching while she sings

Not well though, she does not seem to know

I hear her singing,  nonetheless, it is better

Than the absence of song

I had before she came into my room

She used to feed me with a spoon

And hold my cup up to my lips

She wiped the dribbling shame from cheek and chin,

Does she remember me?

Does she know that I remember her?

At times, I feel that I am just part of her occupation

At times I feel that I am so much more

She feeds me now though through a tube

It’s not the same and yet it is

I can’t explain just how it is

She accepts it, and so must I

First try at a little poem in a long while 🙂

I copied this from an earlier post of mine, because I wanted a sunny picture on my site today. 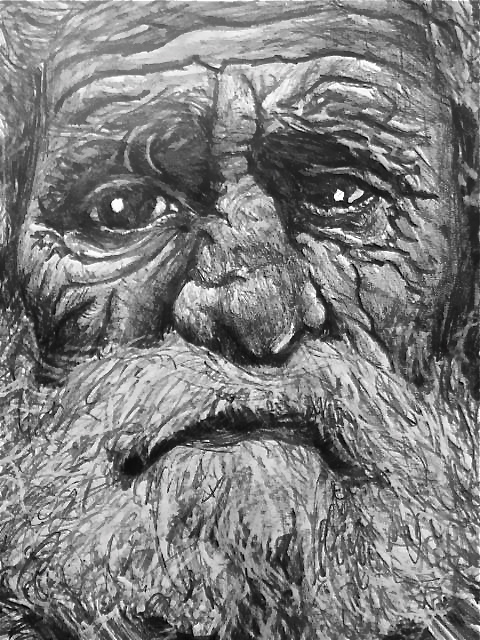 Sketch by N. Wilcox at deviantart

The lines on this face drawn by an artist’s hand, forged by a subject’s soul

Tell the stories of a man once young grown old

Homeless, not knowing from where he came nor where he is going to land

Living his life according to no one’s plans

There was an old man in my childhood whom I will never forget.  My mother helped me to remember.  She wrote a story about him that got published in the LaGrange Daily News.  He became rather famous whether he wanted to be or not.

This old man lived in The Heart of LaGrange Hotel that sat in the middle of the “Y” intersection where Hines Street met Hill Street just up the road from where we lived.  He was not totally homeless, but he might as well have been.  I was no more than about five or six years old.  My older sister and I would see him coming up the sidewalk pulling his little red wagon.

When we saw him, we knew it was time to run in the house and gather all of the glass soda bottles.  Back then they were worth 10 cents apiece.  A few dollars could easily be made off of generous children.  The store on the other end of the street collected them for recycling with more soda.  We could have exchanged them or sold them ourselves, but Mama had a purpose.

She died when I was eight years old and there are so many things about her character, like the character in the man’s face in the sketch above, that I will always remember.  His lines came from years of sorrow and joy.  Her altruistic compassions came from a giving heart.   She intuitively knew that we had nothing to fear from this old man.

He would come by in the morning to collect the bottles that we readily shared, and come back in the evening with a handful of pecans that he had collected along his way to share with us.  He told us outlandish stories as we sat on the roots of the ancient oak by the street.  We listened with eager ears.

I asked him one day what his name was and he told me, “People call me Uncle Charlie Trashcan.”

“What is your real name?” I wanted to know.

“I don’t know.  My father wrote it down on a corn shuck and the cow ate it before I learned to read,” came his reply.

One day some preteens and teenagers jumped him and beat him up.  They left him in the bushes for dead.  His lunch box was smashed.  His wagon was stolen.  My mother found him on a walk.  She brought him in the house and cleaned him up.  He had a bath while she washed his tattered clothes and she bandaged his wounds.  He told us stories while his clothes dried.  She fed him dinner at the table with us.   She packed him a lunch for the next day in a shiny new metal lunchbox with a coffee thermos.  He seemed so very proud when he waved his good-byes that evening.

Mama’s article in the paper produced a new wagon and he got some much needed social services and quite a bit of fame.  That did not stop him from pulling his red wagon up the sidewalk to gather soda bottles, or from bringing us handfuls of pecans in the evening.  It did not stop the storytelling or the smiles that made more lines on his face.

One heart hears a sweet but lonely sound

Clock ticking faster on the wall

Has passed on through the Fall

The antique memories that she found.

Lies and stares, plaster roses on the ceiling.

One mind, all but so sweetly has gone

She wipes his dribbling shame from chin

A time ago the frame seemed gilded

Words not spoken, but shared feelings 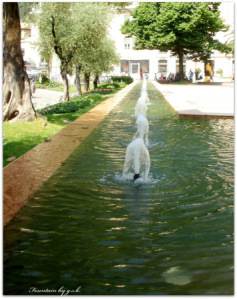 Green bubbling fountains of life in the city so void, not of life, but of green

Rushing not unlike the water after the storm, in hurried fashion fast people rushing

Someone to see, something to do, someplace to be in order to be someone

Forgotten the trees and the breeze across park lawns, striving to be someone not forgotten