I promised a post about our trip to St. Augustine and I really want to share this with you before Christmas. St. Augustine is a city in Northeast Florida and the oldest continuously occupied European-established settlement and port in the continental United States. It was established in 1565.

I know there is dust on European book shelves older than that, but that’s old for North America. When you think of Florida, which really didn’t boom until the 1950s, it’s really historic.

When we first arrived in St. Augustine, it was daylight and the entire city was decorated with Christmas charm, including Casa Monica, our downtown hotel in the historic district. Being the old fogies that we are, we took a quick look around and then flopped in the plush bed to read and nap. 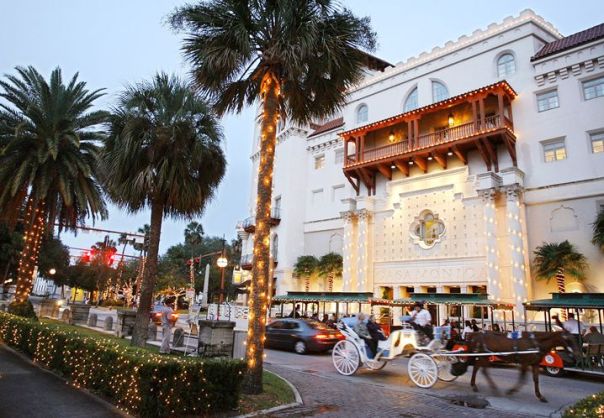 When we awoke it was nighttime, and the city was festively lit up for the Holiday. Our first order of business was the trolley ride around town to see the lights.

The town square was lit up as bright as day.

One of the most delightful things to see were the quaint Bed and Breakfasts all decorated in the Christmas spirit. There were Santas and elves, snowmen and princesses, we even saw a Christmas Elvis. Although the light display was a little underwhelming after visiting Disney’s show, the charm of the historic city really shined through in the garlands and wreaths on display. It was all picturesque, but sometimes a little difficult to see from the back of a trolley.

After the trolley ride, there were sugar cookies and hot apple cider for all of us tourists, then it was off to the Christmas Regatta. If you have never seen a boat display of Christmas lights you should put that on your bucket list. These pictures don’t do it justice. The lights sparkle down reflecting across the water and shine brightly into the night sky. The boat parade made me think of Santa’s sleigh. Boats appear beneath the Bridge of Lions over the ICW Matanzas River and make their way in front of the crowd along the city walls. 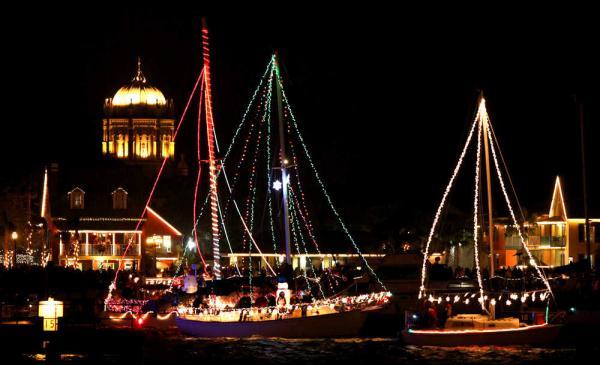 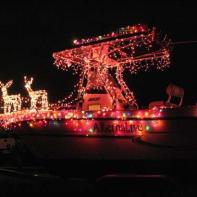 We missed our dinner reservation due to the long line waiting on the trolley, but ventured north up San Marcos to La Pavillon for fine European dining in a Victorian home. The RS selected a seafood and pasta dish. 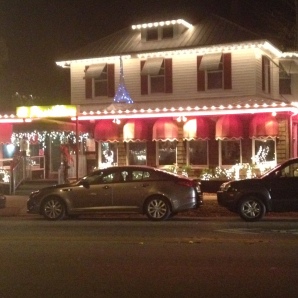 I had the rack of lamb and it was scrumptious.

Then it was back to the hotel to read ghost stories….oooo. An added treat was waking up and getting to see the Huguenot Cemetery near the oldest wooden schoolhouse. I don’t know why, but old cemeteries fascinate me. Part of my fascination with them might be seeing how young people were at time of death. Mosquito borne disease, childbirth, and influenza killed so many back then. There’s a huge cemetery in Key West and the eldest person buried there was thirty-seven at time of death.

It was also kinda creepy to see the mannequins in the old schoolhouse. Some of the other historic houses were a little brighter.

A short walk took us to the fort on the Matanzas River, The Castillo de San Marcos.

This was right up the RS’s alley. I was fascinated by some of the history and the architecture.

The RS was intrigued by its strategic location, just in front of the Atlantic Ocean inlet, the weaponry and costumes on display. 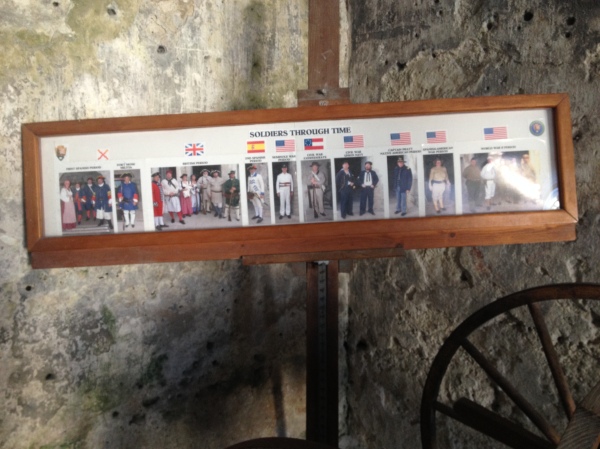 I’ll leave you with one last cheerful photo. Every town should have a store like this:

I have a small image of the setting of “Red Clay and Roses” on my blog site in a slideshow  that shows a few images of Callaway Gardens, a place mentioned a couple of times in the novel.  Although the novel only offers a slim glimpse of Callaway Gardens through a couple of references, I thought I would give you a virtual tour. As a side note to the book, Callaway Gardens was a “whites only” resort until the 1970’s due to segregation policies. It is now enjoyed by all.  Pine Mountain has its own airport, even though it is a small town of only 700 residents in the town proper. There are many antique malls and quaint shops in Pine Mountain. I have many of my own photos but most of these are from TripAdvisor show much more than mine.  If you are looking for a nice vacation spot for spring or fall, Callaway Gardens is the place to go.  It is located in Pine Mountain, Georgia, about 100 miles Southwest of Atlanta, and 40 miles North of Ft. Benning, near Columbus, Georgia.  I raised my family on a farm near Pine Mountain, and there was always something to do there.

Open since 1952, Callaway Gardens is nestled in the southernmost foothills of the Appalachian Mountains. Founders Cason and Virginia Callaway longed for a place where man and nature could abide together for the good of both. More than six decades later, their retreat continues to offer solace, inspiration and discovery for all who come here.

Golfers seeking a real test of their abilities look forward to playing 7,057 yard, par 72 Mountain View, designed by world-famous golf architect Dick Wilson. Tight, tree-lined fairways are characteristic of this true championship course. Mountain View was home to the PGA Tour’s Buick Challenge for more than a dozen years. One of Mountain View’s most intriguing holes is the par 5, number 15 where the threat of water looms over both tee and approach shots. This hole was ranked as the fourth most difficult par 5 on the Tour by USA Today.

All but a few Photos are courtesy of TripAdvisor.  The Chapel photos and some others of flowers and the bike trails are my own.

Fall season in stained glass along the chapel wall.

Summer season in stained glass along the wall of the chapel.

Spring season in stained glass along the wall of the chapel.

Winter season in stained glass along the chapel wall.

For Belinda of BusyMindThinking.  Since my header shows the Orlando skyline at night, I thought I would give you a glimpse of Orlando by day.  Who doesn’t know Orlando, right?  I live in the Lake Conway area near the International Airport,  just on the edge of the downtown area of Orlando.  Not so touristy over here.  More like a small town within a big city.