I am constantly looking up Florida facts and details for my regional writing. Sometimes these little tidbits end up in my books. I compiled this list from a variety of resources: 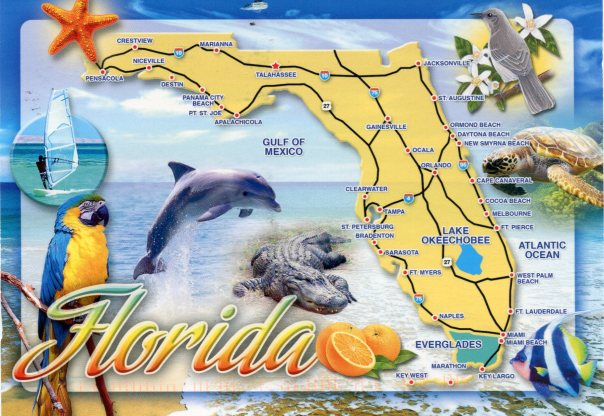 I hit a plot dilemma yesterday and got stuck. Took me a while to figure that one out. Finally broke down and wrote out an outline for the remainder of the book, mind maps of research, more details. This is a picture of my work space. A long while back, when I first started with Scrivener, I took a picture of my desk all nice and clean and organized. Still using Scrivener, and the WIP is neatly filed, but can’t say the desk has stayed very well organized. 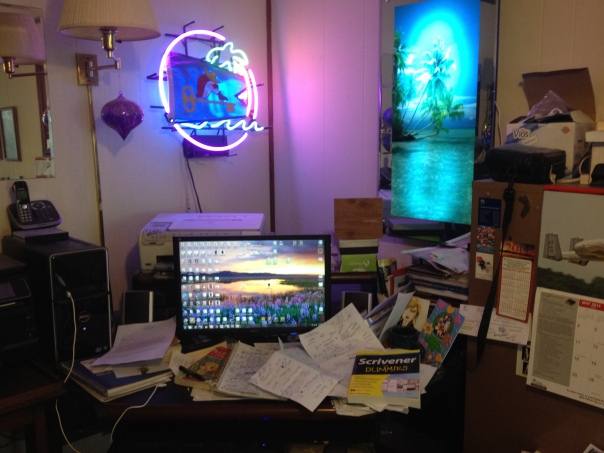 Rocket scientist is in Baltimore. Was up at 5 am working on my plot dilemma. Woke up around 9 am with a sore throat, stuffy head, coughing till I peed myself, vomiting, illness. Had the sick granddaughter over on Sunday for 8 hours. So, we know where this came from. Bless her heart. Today is the daughter’s birthday, middle child, she is thirty three. Damn, I feel old.

Have spent the afternoon writing down patois phrases I know and researching others. Got a Jamaican suspect. Feel pretty good about where I am going with this now.  Asians, Hispanics, cowboys, suits, bikers. A colorful cast of characters for my detective and his sidekick, no doubt about it.

It’s a fun write, and I am hoping it will be a fun read. Much different than anything I have written before. Not nearly as serious, although there are serious crimes. This writing requires a transition in styles for me and I do find myself slipping back into old patterns.

My work in the past has been praised for attention to detail, and the novel is filled with descriptive details, but I have to be careful not to get too windy or verbose. We’ll just have to see how the beta readers feel about it when that time comes.

Going to take some Benadryl, some Nasacort spray and try to get a nap now. I’ll be writing again tonight.

I am writing a book about my mother and my aunt, two sisters who both suffered from bipolar in an era when there was even more stigma, and less effective treatment…one committed suicide and the other survives. I hope to be able to represent the familial genetic component, in an honest and realistic observation of mental illness, without contributing to the negative stigma of the disorder.

One book I was surprised to see in the character development list was DSM-5 (Diagnostic & Statistical Manual for Mental Disorders 5th Edition) Helpful for characters, dating, the workplace, and family reunions ;).

This is a book, a Bible, if you will, for categorizing mental disorders. It was originally complied for two basic reasons: 1) To aid physicians and research scientists in their practice, and 2) For labeling purposes for insurance companies to use in strategizing reimbursements. I never really thought of how useful it would be for character development.

I had to learn this book from cover to cover when it was DSM-III, and again when it was DSM-IV, so I am feeling one step ahead. It has grown by thousands of pages since it first started out as the wee DSM-I in 1952. Not because we became sicker, though that may be true, but because science fine-tuned research and the labeling process. I know psychiatrists who proudly exclaim that they could attach a DSM-5 label on any living breathing human. Just so you know, we’re all a bit unwell.

One I am reading now, “Damnation Hospital” is very interesting. 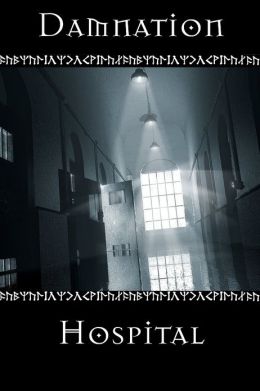 It is a two book collection, “But for the Grace of God” by the late Peter G. Cranford. This is a look at the history of Milledgeville GA’s Central State Hospital that opened its doors in 1842. World’s Largest Mental Institution and one of the nation’s oldest, located in the center of my home state. Peter G. Cranford was a chief psychologist there in 1952, and along with the institution’s history, there is a diary of his daily experiences. There are many patient profiles, but little about actual treatments…which has been disappointing, as there is so little documented about the era.

Also included in the Collection is a fascinating little story titled “Posey with the Insane and Sane” by Lois W. Lane (yes, that’s her real name). It is about a young black woman while she was a patient (inmate, they called them) at Milledgeville’s hospital (not sure of the time period, I have a letter out to the publisher now, trying to find out), a long time ago. As the story progresses, she gets released, and lives the rest of her life outside of the institution.

I believe there will be much useful information to be gleaned from these two books.