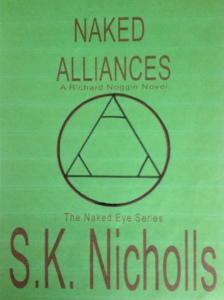 A potential case offered by the former mayor of Orlando could give Richard Noggin P.I. the edge he needs to propel his business into the big leagues. Before he can get to his meeting for his new assignment, a cold case murder, he gets sucked into a crisis situation involving two women from Orange Blossom Trail in the red light district. His calm existence as a private investigator solving marital conflicts and fraud quickly unravels when a transsexual entertainer dumps an abused Asian girl on him.

I sent off my manuscript to a couple of beta readers today. (Thank you so very much for your willingness to take on this task!!!) Now I am bored…waiting, and was playing around with cover image ideas and blurbs. This, of course, is not a professional book cover image but it works for a manuscript .mobi file pretty good.

I have Book Two in my head, so I have started roughing out a vague outline. I have always been a linear writer, but crime fiction does not lend itself well to that method. So I am experimenting. Some of what I write in Book Two will depend on characters from Book One, so I am anxious to see how the beta reading goes before I get too deep.

What do you think of the blurb?

If you are not having fun, you are doing something wrong!

Thank you to all the commentators. I believe we have a good gritty blurb that speaks more to the mood and genre of the book. Special thanks to Misha Burnett, who got me thinking in a different direction. That’s what I love about “social” media. People can pool ideas and creativity abounds.

“Richard Noggin, a Florida private investigator, figured that taking on a maleficence case for the former mayor of Orange County would be good for his career. Instead he finds himself in a shadowy world of sex, secrets, slaves…and murder. Drafted to solve a cold case, murder leads to murder. From Little Saigon to Leisure Lagoon, Richard works to protect a young girl and bring down a sinister crime boss.”