This is a tattered photograph that I have carried around for 43 years since the age of ten. It was retrieved from a scrapbook that my grandma had in an old trunk that held my mother’s personal effects after she died in 1969. The scrapbooks were filled with the sorts of things teenaged girls and young women collect, postcards from places visited, movie and theater tickets, coupons for dancing lessons, pressed corsages, letters exchanged between friends and lovers. On the back it is signed, “Love, Carol.” I don’t know who the intended recipient was supposed to be, but it became the only tangible image of her that I possessed for thirty years. 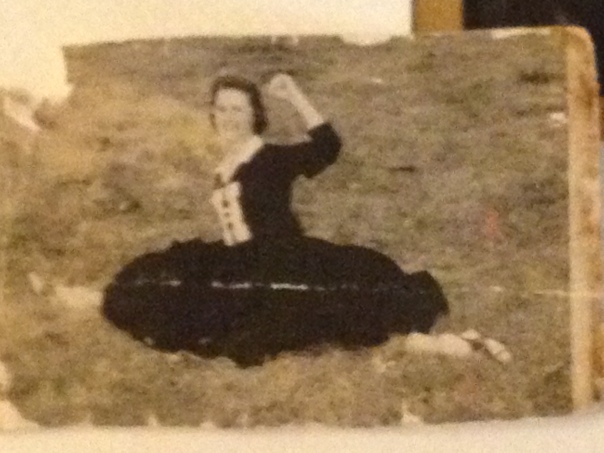 My aunt, my mother’s only sister, had a few photographs. They were mostly small pictures taken in their childhood years and there were only a couple that my aunt had of her sister as an adult. There were other pictures, but they were given to my older sister for safe keeping and we became estranged over the years of separation that followed Mama’s death.

In 1997, after coming to Florida and connecting with a cousin, the one who owns Cypress Cove Nudist Resort and Spa, I learned that my uncle, his father, who started the resort back in 1964, had been a photographer with the Miami Herald during the 1950s. When my Aunt Pete, his wife, died in 2000, my cousin was cleaning out boxes in their home and ran across some photographs of my mother and her sister that were taken in their teen years. There is now a vast treasure of black and white 8X10s, and smaller photos of the two sisters. I was overjoyed to be gifted this collection and shared them with my mother’s sister, who was also thrilled.

I want to ask you to take a look at two sets of these photographs that hang on my wall. You don’t know the story of these sisters, Claudette and Carol, but I would like to ask you to tell me if you see anything that hints of a story in these images.

The images alone demonstrate the differences in these two sisters.  My mother, Carol, a ballerina and dance instructor died of suicide at the age of 26, and Aunt Claudette, a pianist and horticulturist, is 74 years old now.

That side of my family is riddled with mental illness and addiction.  Of all the many cousins and aunts and uncles on my maternal side of the family there are geniuses who became entrepreneurial millionaires, and there are paupers who suffered epilepsy, neurological conditions, psychiatric disturbances, multiple tragedies, became institutionalized, or died trying to overcome the obstacle that is madness.  There is a fine line between madness and genius. Mental illness and neurological disorders were cloaked in a veil of secrecy in their era and still have a degree of stigma associated with them that needs to be overcome.

Very few were able to walk the middle of the road, but the strength found in faith, time, and modern science and medicine has made a huge impact. My aunt is one of those who did, although she had severe issues with bipolar and addictions.

I had a brief adventure with drugs and alcohol between the ages of 17 & 19, but addiction was never a problem for me. I was hospitalized for an acute psychotic episode when I was 19, and have been on medications for bipolar and in therapy ever since that event. I drink socially on rare occasions but the experiences of me and my aunt have paralleled many times…either on a personal level, vicariously, or through my patients in my nursing career. My moods are relatively stable now. I am still “driven” at times and “depressed” at times, not to extremes, but such has not always been the case. I would like to tell my story someday, but not before I tell the story of the two sisters, my mother and my aunt.

When I wrote “Red Clay and Roses”, I was telling a story that was wrought with historical tragedy and the serious issues of racial tension and reproductive rights and responsibilities. I wrote passionately about events I witnessed personally or events that had been shared with me by others who had lived the experiences. I did not set out to write a novel by a specific formula or template. I documented a harsh reality. It was open and candid. I have never been one to shy away from that which is painful or shameful. A wounded society does not heal itself by looking the other way, and neither do individuals. At the same time, I tried to be as unbiased as possible and approach these unapproachable issues with sensitivity. On that level, I feel it was successful.

In addition to numerous short stories, I have three works in progress. One is a crime novel. I am about 30,000 words into it and my husband, who reads them daily, loves it. I feel that it is superficial and shallow, amusing and entertaining in its own way, but I am not certain that it carries the weight that makes me comfortable in my own writing skin. Another is a murder mystery. It is more a psycho thriller than a crime novel and I am about 15,000 words into it. I liked the beginning of it, but it doesn’t seem to be going in the direction that I planned for it. Sort of hard to explain, but it, again, doesn’t flow with the passion from the pen that I feel most comfortable with…it feels forced and I am beginning to see that in the way that it reads.  At any rate, I am not so sure that this genre of crime/murder is where I need to be right now. I don’t feel like I am in my element. Perhaps this is something that I can come back to at some future point. The final work is an autobiography of sorts that is almost unbelievable as a memoir.  It is a complex life that I have lived in foster care, an orphanage, on the street, in the islands, small town USA, the countryside, the nudist resort, and the big city. So I am not sure what to do with this either, whether to continue it or shelf it for a while.

Which brings me to questions that I need your help with. It seems to be the passion that I felt when writing “Red Clay and Roses” that I am missing.

For those of you who have read “Red Clay and Roses” (A fictionalized true story set in the 1950s-60s, but involving relatives on my father’s side of the family), you already know that Carol is mentioned twice in that story…once by Hannah in relating her memories of her mother and her mother’s death, and again by her cousin, Sybil, in relating the death by suicide of her cousin, Henry’s, wife, leaving three little girls with no mother.

If I decide to write this book, I would approach the writing process much differently, not as a fictionalized true story being told to a narrator, but as pure fiction (which is always, in part, based on some truth).

Without knowing the details, do you think the story of Claudette and Carol is one that you would find interesting? Particularly, how Claudette coped in the long run to turn her life around. I have been all over Amazon reviews this past week and there seems to be quite a market for this sort of thing as well as the era…people are saying that they are too old to enjoy the drama of Paris Hilton, and too young to relate to the 1930s and 40s, about which so much is written.  Finding and connecting with these people will be another challenge.  People my age and ten years older are beginning to retire, have the time to read, and they are dissatisfied with what is on the market.

As a family saga, beginning in the mid-fifties and moving into the mid-nineties, do you think this story would make a worthy sequel to “Red Clay and Roses”?

For those who have not read “Red Clay and Roses”, what are your thoughts about “Surviving Sister: A Melody of Madness”?