I have an old copy of Uncle Wiggily in the Country by Howard R. Garis. The copyrights are 1916 and 1940. The title is worn, the book is held together with tape. Various children have colored its yellowed, torn pages. The book was first purchased by my grandma to read to my aunt and my mother. They were born in 1940 and 1942 respectively.

Then, my mother read it to me and my two sisters, one older, one younger. We used to cuddle in the center of my sister’s twin bed and listen as she read each chapter. We would embrace under the covers protecting each other and hiding from the tiddlewink, an evil but sympathetic creature with claws and sharp teeth who lived in any body of water from swamps and ponds to bathtubs and washtubs. My mother died when I was eight, and yet, I can recall the sound of her voice as she mimicked Uncle Wiggily, his nephew, Sammie, the bad old tiddlewink, and various other characters in the book. They were moments I cherish.

I read the stories to my children. In fact, I read something to them every night all the way into to their teen years. But it started with this one. The Publishers Note says:

Uncle Wiggily Longears is a rabbit gentleman who walks with a cane. He and his nephew get into all sorts of adventures in the country as you can see by the table of contents. 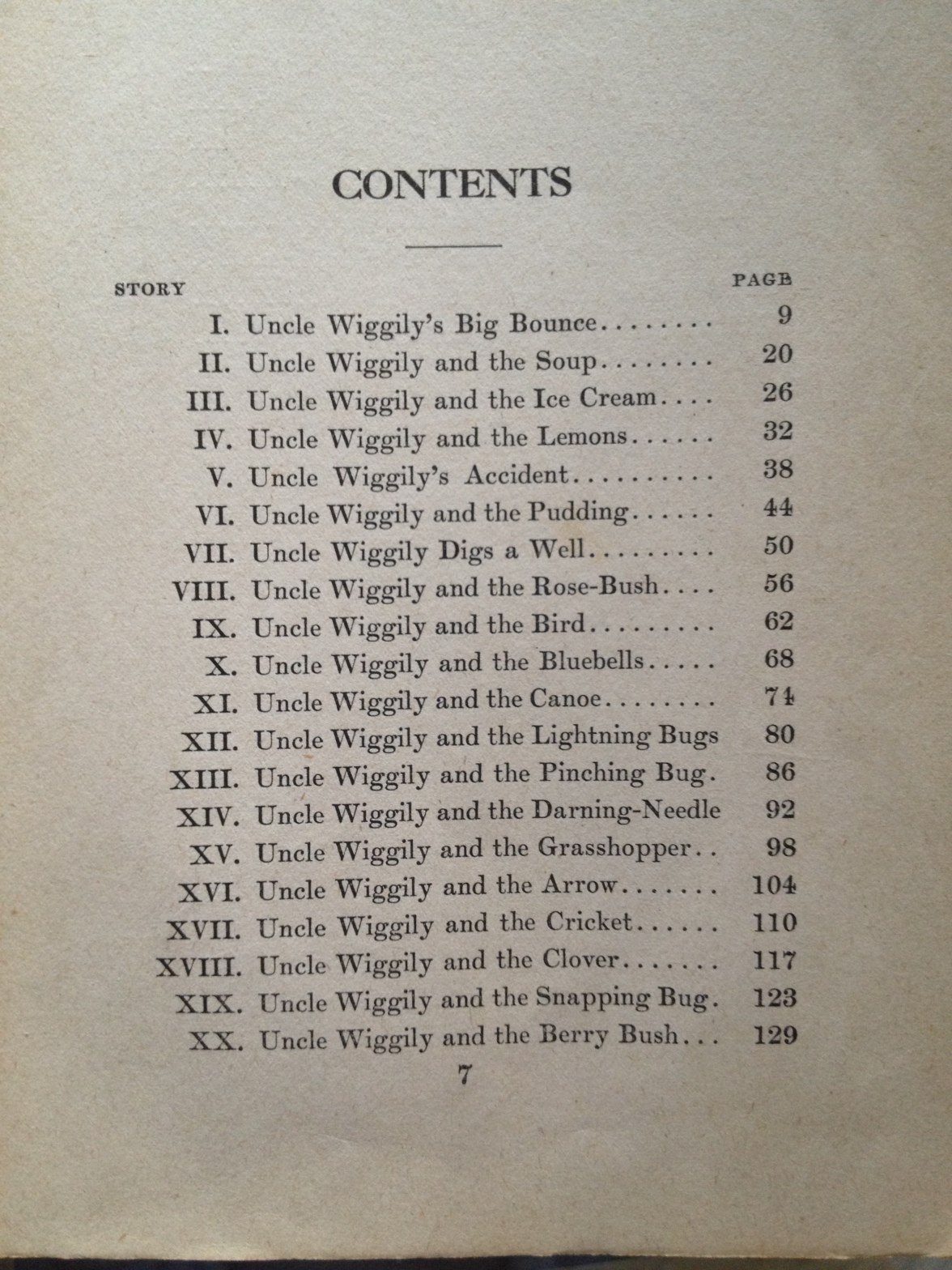 It is not illustrated with pictures. Everything told in it had to develop from your imagination. I listened with awe as each chapter told of another adventure. The chapters all end with a silly piece of nonsense that was designed to intrigue young readers into looking forward to the next chapter, and it worked. Being a bit of a comedian myself, I eagerly anticipated the next story and looked forward to the silliness at the end of each chapter. They were catchy little nonsense phrases like:

“’I wonder what will happen next?’ And what did I tell you on the next page where you may read a story called ‘Uncle Wiggily and the Ice Cream,’ that is if the stick doesn’t fall out of the lollypop and hide under the rose bush for the pussy cat to play tag with.”

“And by turning over a page, if our chimney doesn’t jump over on the other roof to visit the stovepipe next door, and forget to come back in time for breakfast, you may read about Uncle Wiggily and the rose-bush.”

“Now, in the next story, if the bathroom sponge doesn’t drink up all the baby’s milk and go to sleep in the china closet, I’ll tell you about Uncle Wiggily and the bark canoe.”

“And if the man who cuts our grass doesn’t pull up all the dandelions and turn them into tiger lilies, I’ll tell you about Uncle Wiggily and the cheerful cricket.”

They are timeless stories that I am now reading to my own granddaughter, 74 years after they were purchased by my grandma, and she loves them, also eagerly anticipating the nonsense at the end of each chapter.  She always asks me to explain what is meant, and often I can’t do that…they are meant to intrigue and entertain.

Do you have an old, treasured, dog-eared book that you could not possibly part with?

43 thoughts on “What is Your Most Beloved Book?”